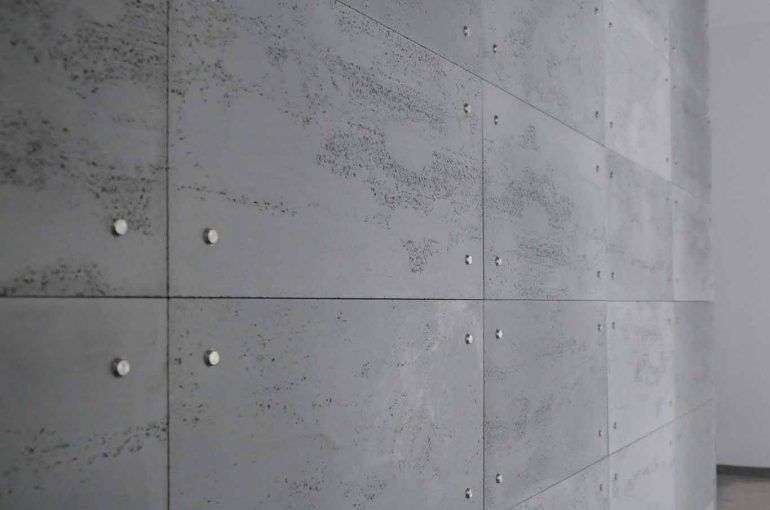 We divide decorative concrete according to the way it is manufactured and applied:

The concrete excavated material is produced in a concrete batching plant and then transported to the construction site and poured into the formwork there. That is, between the element to be covered with structural concrete and a special, tight supporting structure made of boards or shuttering boards. After removing the formwork, the surface texture on the concrete is obtained, which is a reflection of the formwork used. That is why it is so important to use new planks or shuttering boards in order to achieve a smooth and pleasant to the touch surface. When pouring the excavated material into the formwork, the concrete is vibrated and evenly distributed, homogenised and vented.

In architectural and formwork concrete, the conditions in which it is formed play an important role. Inappropriate weather conditions, carelessness of contractors, the use of bad materials or savings on the quality of the excavated material, and even bad safety and care treatments are the cause of frequent defects of this type of architectural concrete. Often the final result is problematic and sometimes it is not accepted by the architect or investor. Repair is virtually impossible, or it takes time and money. It becomes necessary to perform the work from scratch, often after removing the defective layer.

In order to ensure that the final effect of exposed concrete from formwork is close to expectations, an “Architectural Concrete Implementation Group” should be established. The task of the group composed of the investor, architect and contractor is to discuss the details of the execution, deadlines, making a test (drip) on the construction site and in conditions that are the closest to those in which the actual implementation of architectural concrete will be carried out. This will later serve as a model for the assessment. However, one should be aware that the pattern is a reference point and it is not possible to obtain a repeatable identical effect.

The production of structural concrete in formwork is quite risky and expensive. Awareness of costs and unforeseen effects should be taken into account by both the investor and the contractor already at the stage of budgeting and bidding.

A less risky and costly investment in architectural concrete is the use of prefabricated concrete slabs.

Architectural concrete slabs are currently the most popular and the most realistic way to achieve a durable and aesthetic decorative concrete lining.

Due to different production methods and a great variety of concrete excavation recipes, concrete slabs of individual manufacturers will be very different from each other in practically every respect. These slabs are only connected by the fact that they are prefabricated from the form into which the excavated material is poured.

Concrete slabs from box forms – wooden, composite and steel. In such forms, the cheapest concrete slabs are produced. The porosity of the slabs depends on the density of the excavated material and the degree of venting through vibration. Artificial fibres are added to the excavated material for such slabs, which eliminate shrinkage during drying of slabs and make it easier to remove the product from the mould. Such boards often have unsightly jagged edges, are over-sensitive and can have a lot of disadvantages. Porous slabs, which are produced in moulds with a smooth surface, are the result of deliberately too thick excavated material and insufficient centrifugation. 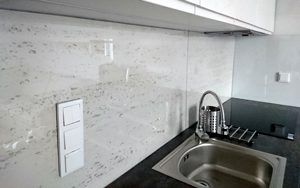 Such boards are often found, have a low price, do not have any certificates, they are often offered as custom-made, because the construction of a wooden form even for a small number of pieces is fast and cheap. Unfortunately, such boards should absolutely be disqualified, because they carry a serious risk of danger. There are numerous cases of cracks and falls of this type of panels from the wall. And it happens that they are used on facades or in difficult rooms. In such cases, it is often necessary to dismantle such panels. After a while, especially when temperature and humidity changes, disfiguring stains appear, which do not disappear, and there is also a significant color difference between the individual panels. Such experiences of investors and architects often give opinions about architectural concrete as an unpredictable and difficult to install material.

Due to the cost and strength of polyurethane and silicone forms for concrete, it is a more expensive method of prefabrication of decorative slabs. On this type of moulds the surface structure is already applied, so in order to obtain the effect of uniqueness it is necessary to have a significant number of moulds for continuous production. However, these forms allow to obtain decorative concrete not only smooth, but also with varying degrees of porosity, without loss of physical and chemical properties. In such forms, Luxum hand poured panels of the highest quality standards available on the European market. There is no need to add any chemicals to the excavated material to improve ventilation. The plates are well and properly subjected to the vibration process. This is definitely the best way to produce good concrete slabs.

Thin concrete can be used directly on old but stable substrates. For example, when applying on old tiles, floors or showers, we have an absolutely fast, durable and avant-garde, exceptionally successful bathroom design with complete renovation.

The same procedure is perfect for furniture or other interior furnishings. 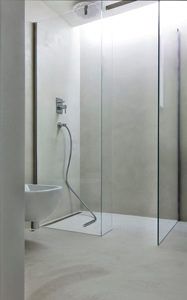 An important aspect of this is the quality of the thin-bed architectural concrete mass. At Luxum, thin-bed concrete from Italy is used and further modified in its own laboratory to achieve the highest parameters and even better abrasion and resistance to intensive use. Especially since Luxum uses this type of concrete most often on washbasins and worktops. This is the toughest test for thin-bed concrete.

Micro-cement is a concrete mix with special aggregates and the best cement, where the excavated material is mixed with resin instead of water.

Unfortunately, it is very difficult in the correct application, so it is not offered in components, but only together with professional workmanship. Unfortunately, the price is not low and may even exceed PLN 1,000 per m².

Thin layer architectural concrete (microcement, nanocement) is very often mistaken for imitations of concrete. They are available, among others, in the form of thin-layer plasters, often offered on shelves in supermarkets as “architectural concrete”. Well-known paint manufacturers repeatedly use the lack of a clear definition and legal regulations. They offer various types of coloured masses, which have nothing to do with concrete. They are promoted in advertisements and social media, where they are placed videos showing the ways of application. These are ordinary grey plasters, stuccos or structural paints. They imitate real concrete, but they are not. They are not suitable for applications on demanding surfaces. In order to achieve a durable and desired aesthetic effect, use real thin-layer concrete.

Luxum delivers the perfect architectural thin-layer concrete HD CONCRETE – BATHCREATE together with the application. The company applies the concrete to various types of entrusted surfaces as well as to elements of equipment ordered from the Luxum offer. Various finishing textures and a dozen or so colours are available. The standard colour is typically grey concrete.

Our website uses cookies (so-called cookies) for statistical, advertising and functional purposes. Thanks to them, we can customize the site to your needs. Everyone can accept cookies or have the option to disable them in the browser, so that no information will be collected.ok